Look back at Singing Rock STEEL 2016 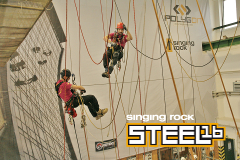 The international rope access competition Singing Rock STEEL is finished. The ninth edition of this event happened on 26th and 27th November 2016 in Kladno, Czech Republic. More and more participants come every year and this year there were only 13 Czech competitors out of 73, but they still managed to get to the medal position in the team competition.

What is Singing Rock STEEL

This competition, which was known as Sambar STEEL for years has a tradition and in 2007 it all started only as a small event. Since then a lot has happened and the number of competitors taking part is bigger now than ever, but the whole point of the event is still the same. From the very beginning the organisers have been trying to create an opportunity for rope access technicians to meet and in safe and professional environment compare their strengths. This kind of meeting gives like-minded people a chance to compare their equipment, techniques and also very importantly, build new contacts and friendships.

In the Czech Republic the Singing Rock STEEL is the only competition of this kind and at the same time it belongs to the biggest competitions in Europe. Similarly like in other rope access comps, the competitors take on tasks in teams, but in Kladno the team race takes part on the second day and on the first day is an individual race. Everyone has a chance to let shine their strengths in four different tasks and compare their skills not only with their competitors, but also with their friends. This makes the STEEL competition unique. 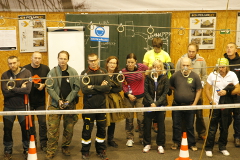 The goal of the organisers has always been to prepare an interesting competition with a professional organization, running in a safe environment, offering every year a bit different tasks and challenges and often also a chance to try or learn something new. At the same time it has always been crucial to maintain friendly atmosphere during the whole event, where often friendships are built.


Where is the competition 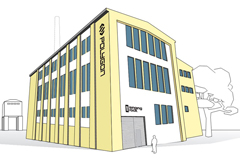 The competition takes place in a training centre for work at height Singing Rock Polygon and at a climbing centre Lezecká stěna Kladno, both in the same building in old industrial part of the city of Kladno. The venue offers training areas simulating a real life and the climbing wall offers its height.

What was the competing about

The competition has two parts, the first day started on Saturday morning with introducing and explaining the tasks for an individual race. The competitors never know in advance what they will compete in and the tasks are different every year. Same as in real life, it is not only about using in advance learnt and thought through techniques but also about being able to think and find solution to challenges and often also try something which the competitor wouldn’t come across in their day to day job. This year the tasks tested the competitor’s ability to tie various knots, speed climb or do a detailed work at height. Every contestant went through each task on their own and collected points awarded for completing them.

Sunday was all about the team competition where teams of three had to show their communication and cooperation skills together with their strategy thinking and problem solving.

What were the challenges for individuals 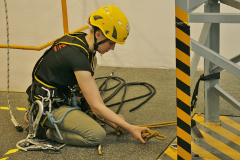 The first task, Knots, was to anchor the rope to a structure using a combination of certain knots – figure of eight knot and alpine butterfly and then connect the rope with second, longer rope, using the figure of eight follow through knot. Then the competitor climbed up on the structure, prepared the rope and descended on it. He then repeated the same on the second structure, but this time using the bunny ears knot and to connect the ropes double fisherman’s knot. 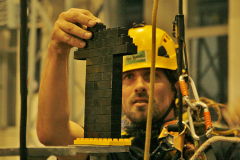 The second task, Lego, tested a set of different skills and abilities, to name one: to transfer from one part of the climbing area to the other, competitors had to use aid-climbing using points on a wire rope. The task here was to collect Lego Duplo bricks from the ground, without touching the ground and using long re-belay transfer back to the other side of the area and there built an arrow from the Lego bricks, the same which is in the logo of Singing Rock.

The third task, The Pole, was to firstly place a rope on a pole by throwing it on it and using the pull-through method use it as a rope for ascending. This challenge tested also the physical strength of contestants with the ascend to a height of 17 metres. During the descend competitors had to go through an obstacle (tyre).

The last, fourth, task was called Sprint and took the least time. Here it all was about just speed. The task was to ascend to a bell, descend back down and overcome a knot on a rope in as short time as possible. So the competitors whose biggest strength wasn’t problem solving and using lots of different techniques and skills, could get valuable points here just by being fast. 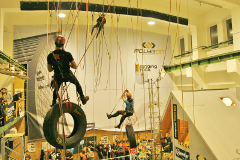 Over all, the competitors could try a lot of different tasks and use many of their skills and experience. The points collected throughout the whole day selected three best competitors and they went head to head to a final task. Here the competitors had to save their unconscious friend from a well. As in a real life rescue, the speed here was crucial, so the first competitor to complete the task was overall winner of the Singing Rock STEEL 2016.

What was the team challenge

The team challenge was introduced on Sunday morning and after the time for questions all the teams had to come up with a strategy and explain it one by one to the referees. In this way everyone could watch other teams, without the last team having an advantage of just choosing the best strategy they have seen all day, because every team had to stick to their original plan. 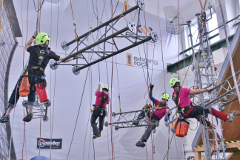 The task here was to lift a lattice structure and place it in between of the hanging ones and assemble it here with bolts, and then again disassembly it and place back to the start. The teams had to finish the task in as short time as possible or to collect as many points within the time limit.

All the teams, were really good, so the best team had to have a really well thought through strategy and execute their plan without mistakes and in a really short time.

Who participated in the competition

In the competition 73 contestants from 9 countries took part. Most people came from Poland (30), the Czech Republic was represented by 13 climbers, 7 competitors came from Russia, 5 from Germany, 5 from Hungary, 5 from Romania, 3 from the UK, 3 from Slovakia and also 2 from Turkey.

This year the competitors made 19 teams, which is double of the amount of teams last year.

In the individual competition the three best men went to the final, where the results of the task mixed up their ranking and on the firt place ended Daniil Cherednichenko from Russian Team Arborist. Second place was Nils Henneken’s from German Team Trainer Kollektiv and on the third place stood Ival Ilin, also from Arborist. 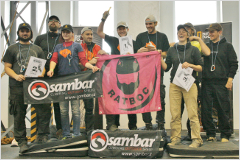 All competitors deserve a big pat on their shoulder for their amazing performance and their hard work. And although all competitors were trying to reach the medal positions, during the whole event the atmosphere was really friendly and competitors were chearing and supporting each other, giving advice, sharing equipment and were helping each other to choose the best technique. Everyone also had another chance to get to know others and chat about the competition and anything else at the afterparty on Saturday night, where every year many spontaneous fun activities happen and there are also drinks and music.

The last but not least important words 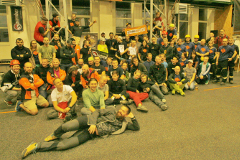 To finish this year’s edition of Singing Rock STEEL a massive thank you goes to all participants and congratulations to all and mostly to the ones who reached the medal positions. A big thank you goes also to the main partners of the competition, to the companies Sambar and Singing Rock and also to all other partners, Climbing centre and Polygon for the venue and Vedox, La Loraine and 2TS for support. A big thank you also goes to the photographers Andy Partychvil Kratochvil and Maciek Stepniak for documenting the event.

The last thing to say is only the invitation to the next edition – on 1st to 3rd December 2017.

Looking forward to meeting you at STEEL 2017
Sambar & Singing Rock 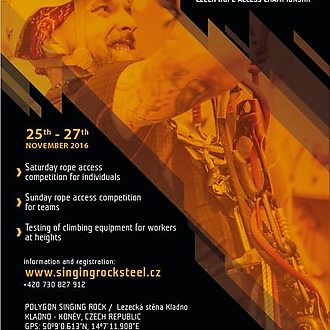 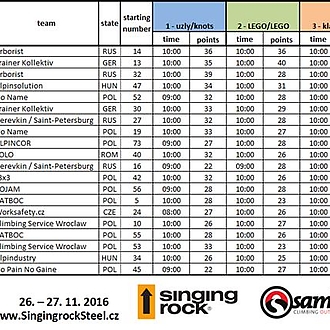 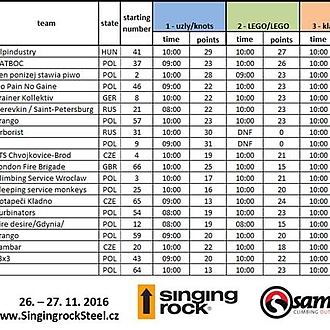 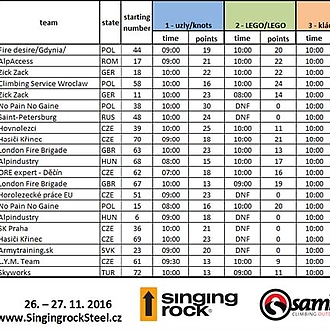 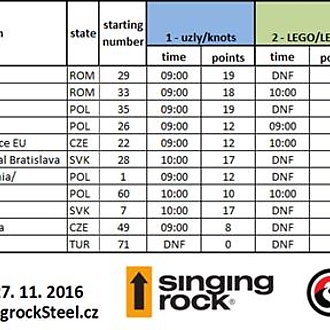 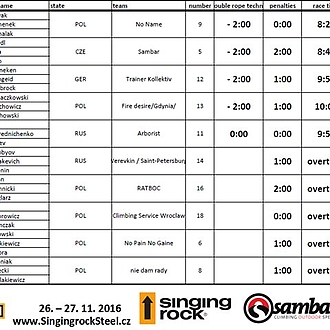 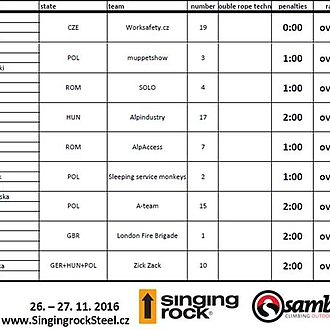 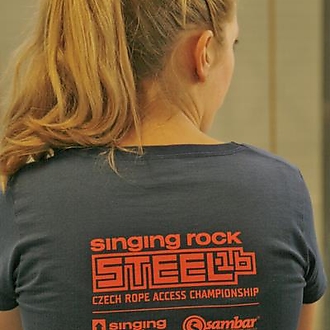 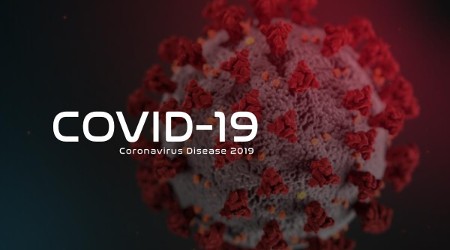 In answer to numerous questions regarding proper disinfection of climbing and personal protective equipment, we made an official statement especially devoted to SARS-CoV-2 coronavirus. 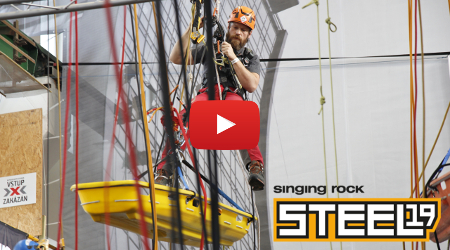 Have a look at photos from 12th edition of Singing Rock STEEL, the industrial rope access competition which took place in Kladno (CZ) on 30th November to 1st December 2019...