More than 100 years ago there was a huge expasion of the textile industry in the Liberec region. At the turn of the 19th and the 20th century the Czech country was a part of the Austro-Hungarian Empire. The Czechs and the Germans were living side by side and both languages were being used. The intense industrial development was caused predominantly by the competition between Czech and German enterpreneurs, who were striving to outdo each other.

In 1873 a new textile factory, current SINGING ROCK headquarters, was built on the banks of the Jizera river. At that time it was a mechanical weaving plant in Poniklá and there were 114 weaving machines in 1881. 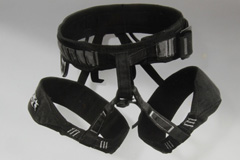 In 1981, during my studies at the Technical University of Liberec, I fell for climbing. My field of studies was textile machine design at the Faculty of Engineering. Near Liberec I discovered a factory producing the polyamide straps for the army and the textile hoses for the firefighters. I seized this opportunity and as a student I started working on my diploma thesis there. From each consultation I brought back a backpack full of various leftover straps. And from these straps I started sewing the first harnesses and backpacks for my friends.

Before 1985, during the time of my studies, we were living in the Communist Czechoslovakia and the climbing equipment was not available in shops. There were no harnesses at all and the ropes and carabiners were very rare and scarce goods. I didn’t sew the harnesses and climbing backpacks for the profit but for my own satisfaction. So that me and my friends are well equipped for the rocks. Český ráj and Jizerské hory are full of rocks and there were even more friends who needed a harness or a backpack. Money was not important for me at that time, the profit was not a priority. 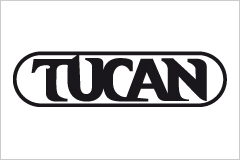 After finishing my studies I tried various occupations but none of these made me satisfied. My last job was teaching at the textile high school in Jilemnice. Two years after the Velvet revolution (1989) I decided to quit my teaching job and to start manufacturing the harnesses and backpacks professionally, that is for profit. It was an autumn of 1991 and since spring 1990 (that is for a year and a half already) private business has been legal. Well, my wife thought that I went insane and did not approve my decision because as a teacher I had a stable monthly income. And my new family – a one-year-old daughter and a wife on maternity leave depended on this income.

It was my grandmother who supported me – she loaned me all her savings and told me to start my own business if I felt like it. So I bought the material for the first 50 climbing backpacks, rented four industrial sewing machines and placed them in four women’s homes. One of them was sewing the front parts, the second one the backs, the third the lids and the fourth had to put it all together. I taught them everything and gave them the cut out parts. Well, it didn’t go well at all. What the first three women sewed, the fourth was not able to sew together. The pattern was good but the technological discipline of the home seamstresses was miserable. The project was failing. At least it looked like that. 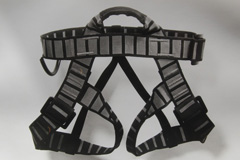 One day in November 1991 the doorbell rang at my place and Pavel Končinský was standing behind my door. Pavel was a climber, too, and also a well known manufacturer of homemade climbing shoes and harnesses. He told me he was looking for a job and so was his wife. Before quitting the job he had been doing the work at height. And he had a sewing machine and 40 square meters of free space for a workshop at home. The destiny brought Pavel to me at the right moment. I moved the unfinished backpacks and the rented sewing machines to Pavel's, and he and his wife finished the job perfectly within a week. I sold the backpacks before Christmas and for the money I earned I bought new material. I even had enough to pay the loan my grandma gave me. Pavel had some savings, too, so the two of us became business partners and started making backpacks and climbing harnesses at his place. It was a sort of a home factory.

In March 1992 I went to Munich for the ISPO trade show with a sample backpack and a new harness, TUCAN, in it, looking for the foreign customers. And at the exhibition I met Jan Goddefroy. We started talking and I offered him a business cooperation. Jan said he would go to see our manufacture in Czechoslovakia after the exhibition, so I brought him to Pavel's from Munich.

Jan was amazed – he was living in Belgium and had never been to the East before. We had our cutting table  made out of a ping pong table from which we had removed the net. Then there were 3 little rooms, crammed with six seamstresses and their six sewing machines. No big factory, really. But maybe we seemed progressive to Jan, as he offered us a financial share in order to start a new company, SINGING ROCK s.r.o. ,with the headquarters at Pavel's home. The company was founded in June 1992. 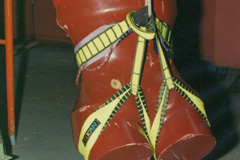 The company was growing quickly and after six months we moved into a newly rented space in the textile factory in Semily. We invested all the income into new technology. In 1994 we got an UIAA certificates for the collection of the TUCAN harnesses. At that time we had already bought a first programmable sewing machine to ensure highest quality of the strength seams and we had 25 employees. Jan was still living in Belgium and was selling our products there. He was not involved in the SINGING ROCK management then.

The cheap Chinese production soon forced us to stop manufacturing the backpacks and the TUCAN climbing sandals, which had been very popular in Czechoslovakia. So we focused all our resources to a development and production of the climbing equipment. We kept innovating the climbing harnesses as well as professional rescue harnesses. Also we added carabiners, figure eigths and other climbing material into our portfolio.

In 2000 we started a new project – development and manufactuiring of climbing ropes. Because of that we bought a big abandoned building of a former textile weaving plant in Poniklá.  Within the first six months we rebuilt the basement and ground floor of the vast building and bought the new technology from Germany. Our first collection of static ropes went to market before Christmas of 2001. And in the following year we developed and brought to market our first dynamic rope - TRINITY.

Step by step we were reconstructing the factory building in Poniklá. First we moved there the rope making workshop, then the warehouse, the shop and the development and, in the end (2004) the whole manufacturing relocated from Semily to the newly reconstructed factory in Poniklá. At that time the whole SINGING ROCK company was under one roof in Poniklá. In 2004 Jan moved permanently from Belgium to the Czech Republic and started to actively participate in the company's management in the field of sales.

Later we found out that finding skilfull seamstresses near  Poniklá was a problem, so we moved part of the manufacturing back to Semily. By 2009 we created a modern company with new technologies out of a small garage business, and we created job opportunities for more than 100 employees. Thanks to this SINGING ROCK is renowned in the climbing world, whether among the climbers or among the rescuers and workers at hight.